Play Review: Much Ado About Nothing 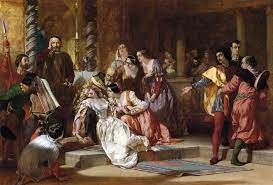 On October 22nd, I went to see a play by the FHS theatre class. The play was “Much Ado About Nothing”. This play was written in 1598 and published in 1623 by William Shakespeare. Although I cannot understand old English, I tried my best to interpret what was happening with the actors’ emotions, facial expressions, and actions.

The play was a romantic comedy filled with many modern elements. Don Pedro, Prince of Aragon, came back from a successful war with Claudio, Benedict, and his men. Claudio is a soldier of Don Pedro, and Benedict is a lord and soldier from Padua. Claudio states his love for Hero, the daughter of Leonato. Claudio agrees with this marriage. Hero and Claudio then plan the marriage. As a joke, Don Pedro and his men tease Benedict about getting married as well. Benedict states that there is no girl in the world perfect enough to marry him. Benedict reveals he doesn’t want this marriage to happen. Although Benedict says this, Don Pedro encourages  the marriage.

Later on, there’s a masquerade ball. Claudio is promised Hero’s hand in marriage. Benedict and Beatrice share a dance together. That night, Don Pedro and his men find themselves matching Benedict with Beatrice, by lying. Basically, they say Beatrice is in love with Benedict and she wants to marry him. Hero and Ursula share the same lies; Benedict is head over heels for Beatrice. Hero, Ursula, Don Pedro and Claudio make sure Benedict and Beatrice overhear them. Before the wedding begins, Don John, Don Pedro’s brother, wants to humiliate Hero, and stop the wedding. Don John and his followers, Conrade and Borachio, start a rumor that Beatrice is not a maiden. Claudio hears this rumor and loses his interest in Hero.

Claudio and Hero’s wedding begins. Hero states her vows, but Claudio doesn’t. Instead he reveals the lie that Hero is not a maiden. Hero is shocked by this and faints. She lays lifeless, everyone leaves thinking she is dead. Hero wakes up and with her posse, they leave the church. While this is happening, Beatrice and Benedict have a moment alone, and they announce their love for each other. As comedic relief, Beatrice tells Benedict to kill Claudio to devote his love. Later that night Borachio and Conrade discuss their crimes. The nearby over watch hears this and arrests them.

Everybody comes back to the chapel and Claudio promises his marriage to this mysterious girl. The unknown girl opens her veil, and reveals it’s her, Hero. The crowd gasps, shocked that she is still alive. The truth is told that Hero is a maiden. Claudio understands what happened and he marries Hero. After Hero and Claudio kiss, This play ends with a happily married couple. 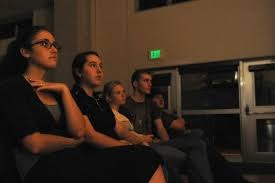 The feedback of the play seemed to be good. I heard lots of laughs while comedic relief was being performed. With the crowd, I also enjoyed them. While the play was being performed, the audience was quiet, showing they were focused on the plot. This play was entertaining, even for a person who doesn’t understand Elizabethan English. I was focused on what was happening, and I think most people who were really focused were able to understand what the actors were saying. This play showed lots of modern ways of acting in old style plays. The plot of this play was very funny, with a hint of romance, and a pinch of shock.

The lighting during the play seemed to match the mood and scenery. Although in a small room, the spotlight was able to follow the actors around. Even during intermission, the lighting was matched so the audience could enter and exit the theatre. The music choice for the play was amazing and brilliant for this play. The music and the costumes truly matched the modern touch to this ancient play. The costumes weren’t too fancy, just enough to match the scene. They were modern with a touch of “this is a high school play.” During the Ball, the music choice wasn’t very old or very new. They chose a song that everybody knew, and had easy steps to remember for dancing along with.

“Shakespeare was really difficult to grasp because, you know, it’s Shakespeare. The cast was a lot of fun to work with, everybody worked really hard especially in the short amount of time we did because it went really fast and the final product was really amazing,” senior, Chad Hadley, said.

Chad was a part of the play. During our interview they spoke lots on the actors ability to grasp Shakespeare in such a short amount of time.

Overall, this play was a great way to show modern elements in an ancient play.