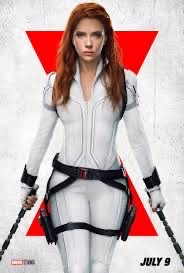 One of Marvel’s newer live action releases, “Black Widow”, is currently the highest money making movie of 2021, sitting at 185 million. This movie explores Natasha Knapp’s (Scarlett Johanssen) origin story and her journey to becoming the avenger everyone knows today, as well as a brand new story for her, that takes place after “Civil War.” The movie begins with a flashback to Natasha’s childhood. We quickly find out her family is on an undercover mission, and that her family isn’t technically her biological, it was just set up for the mission.

It flashes forward to the time period following “Civil War” where Natasha has to go into hiding. Without going into too much detail, the organization that trained her, known as the Red Room, tracks her down and attacks. This causes her to go on a journey to defeat them and expose their secrets. On the way she meets her “family” from the mission years ago. First is her sister who has recently defected from the red room thanks to a mysterious agent who freed her from mind control with a serum that she is now tasked with spreading to the other widows.

Throughout the movie Natasha survives no less than two car crashes and falling off a huge building. This feels unrealistic, seeing as she is just a regular human with no powers, however it is a superhero movie, so it can be expected.

The second “family” member they find is the father. They have to break him out of a prison that the Red Room put him in. Following an exciting battle sequence, they are free and now need to locate the other parent from the original mission. They find her living in isolation. Without spoiling too much of the plot, they come up with a plan to fight the red room, and free the remaining widows.

“My favorite part is when the sister asks about Black Widow’s posing, then does it and goes, oof that was disgusting!” junior, Brooklyn Hintze, said.

Overall, I think the plot of the movie was pretty solid, and the action scenes were Marvel quality. I would definitely recommend watching this one, especially if you liked “Civil War.”